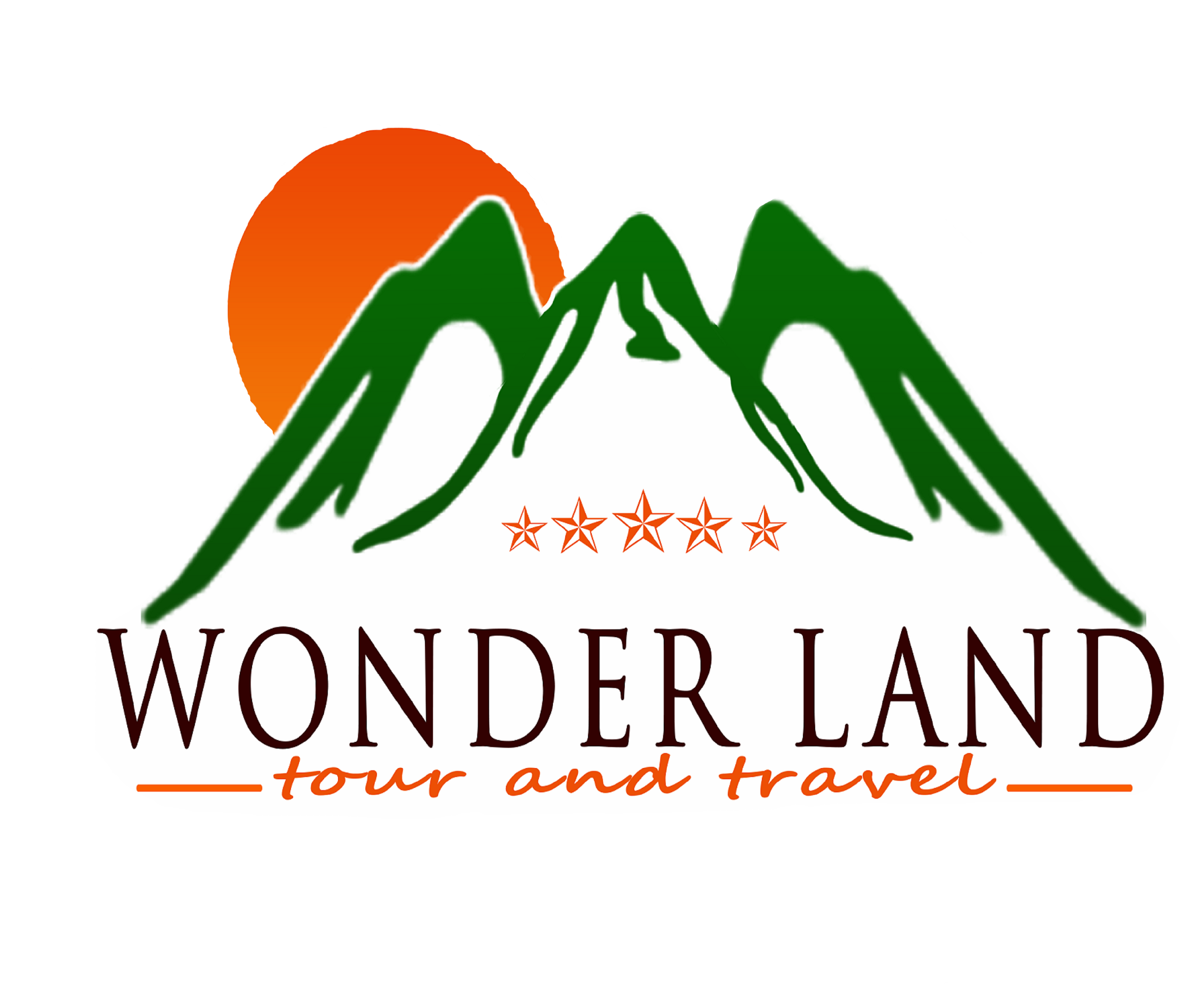 When you think of cultural experiences in Africa, few countries come close to Ethiopia. Travelling the country is to gain a new perspective on humanities place in the world, from past and present to future. 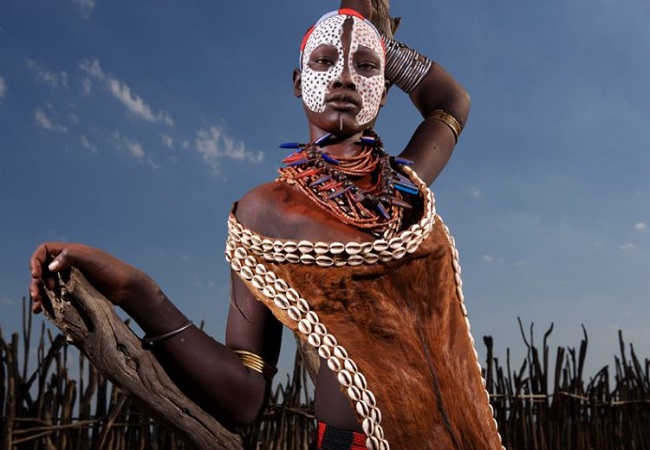 Although relatively large, Arbore is far more rustic and unaffected than many similarly sized towns in South Omo. In common with their linguistically and culturally afflicted Tsemai neighbor, the Arbore migrated to their present homeland from Konso and the pastoralist of the surrounding lowland. The Arbore traditionally played an important role as a middleman in trade between the Omo River and the Konso highland. The town of the Arbore lies in an area covering several tribal boundaries. And because the Arbore people routinely intermarry with other ethnic groups, the tribe is also inhabited by a substantial number of Hamer and even Borena women, adding a cosmopolitan feel to the worthwhile Saturday market.

The Mursi live between their dry & wet season range on the Tama plains, north of Mago park in the Omo River region of southwestern Ethiopia. They care for livestock and plant some crops. The men practice light scarification on their shoulder after killing an enemy and shave geometric patterns on their head. During dance and ceremonies they adorn literally every part of their body with white chalk paint. Young unmarried men practice group stick fighting. The winner is carried on top of poles to girls waiting beside the arena, who decide among themselves which of them will ask his hand in marriage. 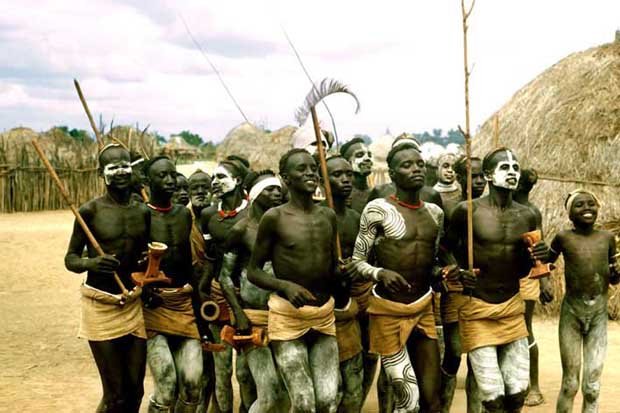 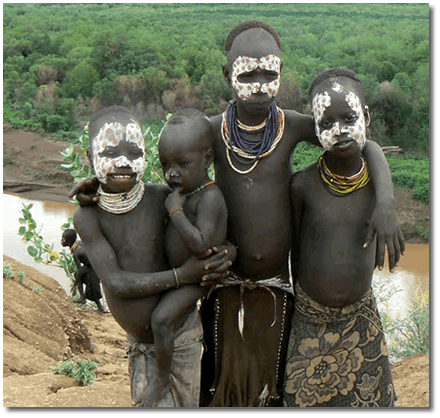 The Karo, which number only about 3,000 people, mainly live on the practice of flood retreat cultivation on the bank of the Omo River in southwestern Ethiopia. The Karo excel in face and body painting, practiced in preparation for their dances and ceremonies. They decorate their bodies, often imitating the spotted plumage of a guinea fowl. Feather plumes are inserted in there clay hair buns to complete the look.

The clay hair buns can take up to three days to construct and is usually re-made every three to six months. Their painted facemasks are spectacular. Karo women scarify their chest to beautify themselves. Scars are cut with a knife and ash is rubbed to produce a raised welt. Being the smallest tribe of the area, this group obviously struggles with direct threats from nearby tribes that have more gun power, greater number, and likely coalitions with one another.

The Hamers are pastoralists and number 30,000 people. They are known for their practices of body adornment and wearing a multitude of colorful beads. Women adorn their necks with heavy polished iron jewelry. Hamer society consists of a complex system of age groups. Moving from one age group to another involves complicated rituals. The most significant ceremony for young men is the “jumping of the bull” – the final test before passing in to the adulthood. Several days before the ceremony, the initiate passes out invitations in the form of dried knotted grass. The ceremony lasts three days. Late in the afternoon on the final day, ten to thirty bulls back and then run across the line of animals. At the end of the line, he turns back to repeat the performance in the opposite direction. He must make this unstable journey without falling. The Hamer men have a reputation of being less than adoring husbands. The women submit to the ritual flogging proudly and love to show the deep scars that are regarded as proof of devotion to their husbands. 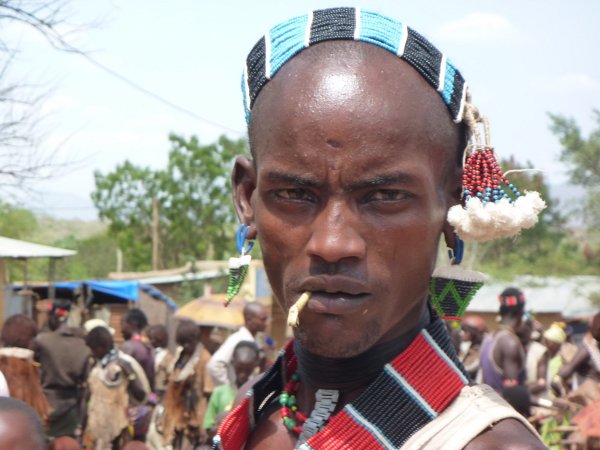 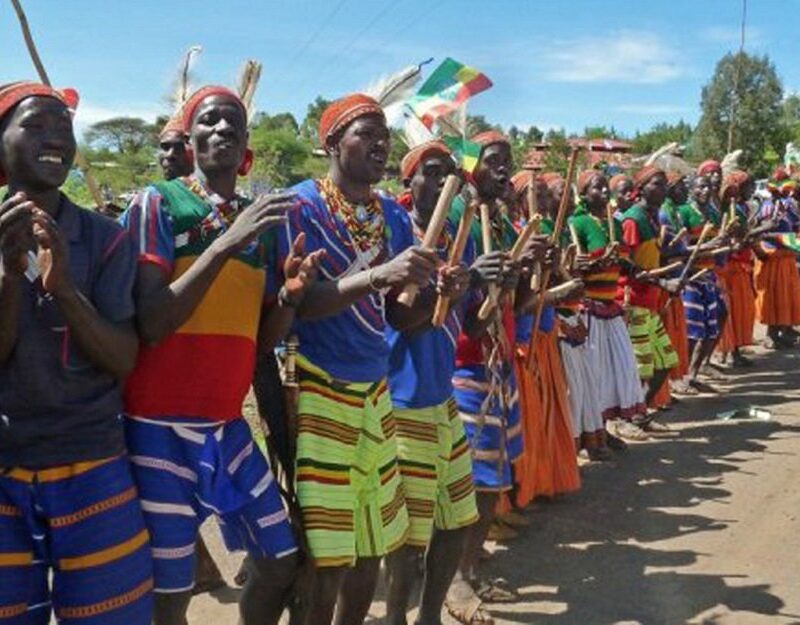 The Konso inhabit an isolated region of basalt hills (essentially an extension of the southern highlands). Their land lies at an altitude range of roughly 1,500m to 2000m. They are flanked to the east by the semi-desert Borena Lowlands and to the west by the equally harsh lower Omo Valley. Mixed agriculturists, the Konso make the most of the hard, rocky slopes that characterize their relatively dry and infertile homeland through a combination of extensive rock terracing, the use of animal dung as fertilizer, crop rotation, and hard work. Traditionally, waga will be erected above the grave of any important Konso man or worriers, surrounded by smaller statues of his wife and defeated foes. 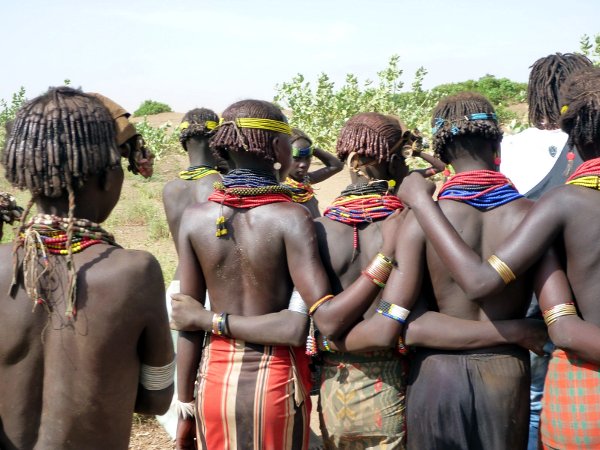 The Dasanech, alternatively known as the Galeb or Reshiat, range across a large territory following the western banks of the Omo River to Lake Turkana. Local oral tradition, reinforced by that of the Turkana, recounts that the Dasanech migrated to their current homeland from a region called Nyupe, to the west of Turkana, after being forced out by the expansionist wars of the Turkana in the late 18th century. Like the Turkana, Samburu and Gabbar of northern Kenya, the Dasanesh/Galeb were originally pure pastoralists, living an almost totally nomadic lifestyle. The abundant water frontage and fertile soil of their present territory has subsequently pushed them toward a more diverse subsistence economy, based around fishing and agriculture as well as herding livestock.